Last year we changed the name of our conference, from Mobile Photo Connect to Visual 1st. Besides wanting to affirm our focus that visuals are increasingly at the core of how people communicate and retain their memories, we also felt we needed to let go of the words “mobile” and “photo” in the event name.

Why? As was the case in the early 2000s when having a website and internet strategy became common practice and companies, therefore, stopped calling themselves “internet companies,” we felt that “mobile” is no longer a meaningful differentiator for our event: Mobile, via apps, websites and mobile marketing strategies, is now a necessary standard part of how most of us in the consumer imaging space do business.

And if that’s not enough reason to stay away from mobile as a descriptor, there is also the challenge of determining what is mobile and what isn’t. Are only smartphones mobile? Or also drones, action cams, 360 cameras, wearable cameras, or instant camera printers? How about digital cameras that are connected through WiFi to your smartphone and its apps, turning your camera into a smartphone add-on?

Similarly, while photos retain the majority of our focus and are likely to do so for the foreseeable future, their boundaries as a separate, standalone visual media format are becoming blurred from both a technology and a business standpoint.

To start, the same capture devices these days let us take both photos and videos.

Finally, with the increased popularity of short-form videos (all the way down to 2-second clips such as are now used by Tinder for the high-speed daters among us), and the Story format popularized by Snapchat and Instagram, we often see more commonality in use cases between photos and videos that we see differences. It’s a building sea change for the industry that our conference must address.

This raises a whole slew of interesting questions. Do consumers indeed mix and match their photo and video content? If so, how do they do this? Do they convert formats from one to another (such as extract photos from videos or create video reels from collections of photos)? Do they embed one format in another that can be unlocked through augmented reality? What hardware and software tools do they now have at their disposal that let them capture, enhance, organize, share, and view photos, videos, photos + videos or anything in between?

We’ll dive more into these and other topics in an upcoming study, but for now, we’d like to report on a subset of the questions surrounding photos vs. videos: top-ranking mobile apps that cater to one format or the other – or both.

We analyzed the 100 top-ranking apps in the US app stores in the Photography (Google Play) and Photo and Video (iTunes) categories on July 1 to determine which ones have features for photos, videos, or photos as well as videos.

[to complicate things, Google Play also has a Video Players & Editors category, but the vast majority of Android video capture, enhancing, and editing apps are listed in its Photography category].

The top 100 apps are aggregated from the top 20 free, paid, and grossing apps, both in the Photography (Google Play) and Photo and Video (iTunes) categories.

The main finding? Less than half of the top-ranking apps in Apple’s iTunes Photo and Video categories are “pure” photo apps: 40% provide photo-only features, 25% offer video-only features, and 35% offer features for both photos and videos. 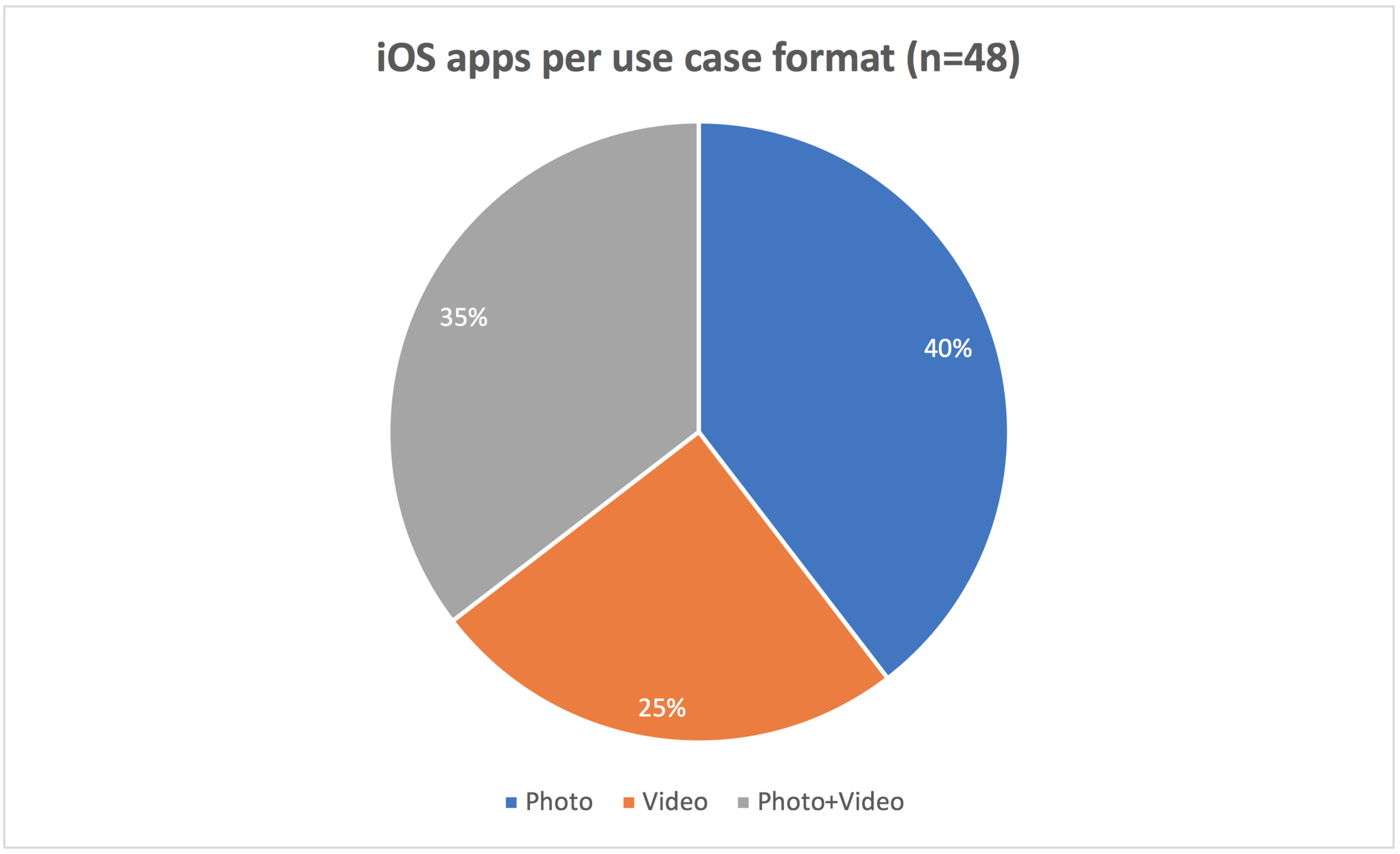 What types of apps offer photo-only, video-only or photo + video features? Here are a few examples. 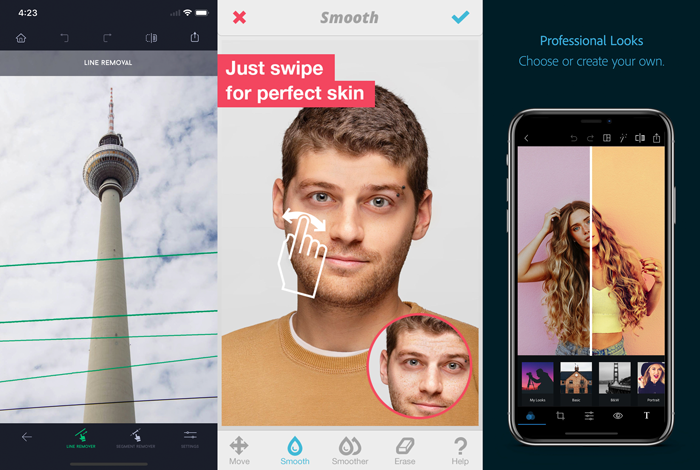 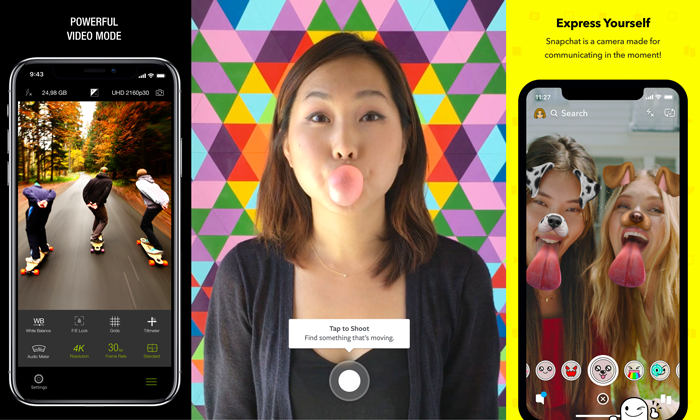 Do photo-only, video-only or photo + video apps differ in their user ratings, age, or representation among free vs. paid apps? In short: the answer is no – we didn’t find statistically significant differences.

However, the app’s age is a tricky subject. With the surge in video sharing is the more recent phenomenon, we could have expected video-only or photo + video apps to be on average younger than photo-only apps, but that is not the case. Our suspicion is that many of the current photo + video apps initially launched as photo-only apps but more recently have added video features. Similarly, video-only apps that are currently among the top-ranking apps are not necessarily newcomers – they might have been around for a while, but only started getting traction now that video and multi-format Story sharing is becoming more popular.

In the next few weeks we’ll be diving deeper into these and a range of other hypotheses and open questions surrounding video and/or photo use cases and technologies. That’s why we would love to hear your feedback or learn about your photo/video innovative apps, cloud services, or devices. Please drop me a note!

And a few more things …

New sponsor: I’m very pleased to announce Insta360 as a first-time Silver Sponsor. See their 360 and other camera models in action at Visual 1st on Oct. 22-23 in San Francisco.

ScanCafe. As of July 15, ScanCafe will no longer accept design request on its PhotoGurus app and website. As a pioneer in using AI for its human-powered photobook design services, PhotoGurus was one of the first solutions for time-pressed consumers to get their photobooks created. In the meantime, a range of AI-using photobook apps has entered the market that also caters to time-pressed consumers. I’ve been told that ScanCafe will come out with a new mobile and AI-based solution later this year.

Snapchat. Snapchat is making it easier to find selfie and world lenses created by other users.

Snapchat. And now the news that gave its stock a short-lived spike on Monday: someone discovered that hidden in Snapchat’s Android app’s code was info that indicates that Snapchat is building a visual product search feature that provides links to Amazon, Shazam “and other partners.” In other words, Snapchat continues to seek new ways to monetize its users’ visual engagement.

This page photo by aixklusiv / Pixabay

Hans Hartman is president of Suite 48 Analytics, the leading research and analysis firm for the mobile photography market and organizer of Mobile Visual 1st, a yearly industry conference about mobile photography.

This site uses Akismet to reduce spam. Learn how your comment data is processed.